This subchapter is provided as a free sample for Integrating SwiftUI into UIKit Apps book.

You can read this subchapter online or download the sample bundle with PDF, EPUB and sample code by clicking the link below.

To get access to the contents of the whole book you need to purchase a copy.

Learn more about the bookAlready have a copy? Request access.

Sample subchapter introduction: In this subchapter we are going to add a SwiftUI view to an existing UIKit application that uses storyboards. The sample app is called Puppy Training. Its main screen built in UIKit shows a collection of tricks to teach to a new puppy. We are going to be adding a filter functionality to that sample UIKIt app using SwiftUI. To follow along you can download the starter project and you can also get the final project to check the end result. Both projects were created with Xcode 14 and set to target iOS 16 by default.

When working with storyboards in UIKit, we can use a Hosting Controller from the object library to present a SwiftUI view hierarchy. The controller created in the storyboard can be prepared for presentation inside the storyboard segue action.

We will add a filter view built in SwiftUI to our sample Puppy Training app where users can filter the exercises based on the difficulty level. The filter will be presented in a bottom sheet using a storyboard segue. 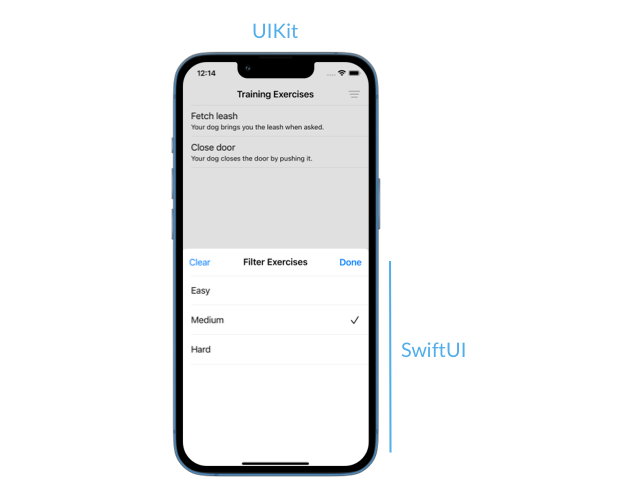 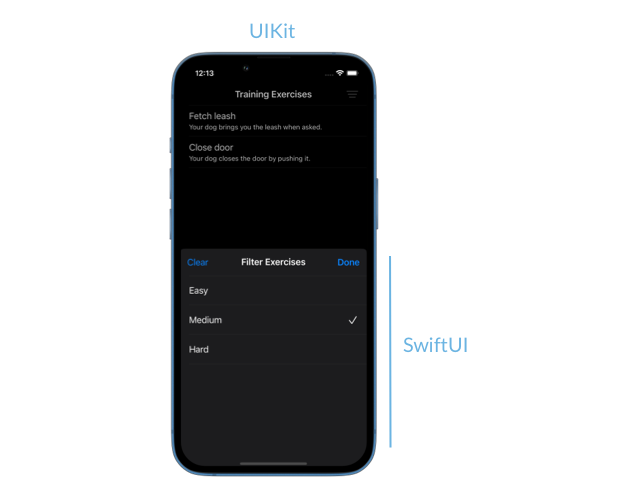 We'll start by defining the data model for the filter in a separate file called ExerciseFilterState.swift. The view controller in UIKit will own the data model and pass it to the SwiftUI filter view to modify the selection. So that the change in selection can be reflected in both the filter list and the collection view, the object encapsulating it has to conform to the ObservableObject protocol, and the selection property has to be marked with the @Published property wrapper. Both the ObservableObject and the @Published property wrapper are included in the Foundation framework, so it's the only import we need in this file.

To make sure that the List view in the filter sheet can iterate over the difficulty levels, we'll make the Exercise.Difficulty enum conform to CaseIterable. The exercise model can be found in the Exercise.swift file in the Data folder.

# Build the filter view in SwiftUI

Next, we'll build the SwiftUI view we want to present. We are going to define the list of the exercise difficulty levels in a separate component and then embed it into a container with the navigation bar title and controls.

We'll create a new file called DifficultyFilterList.swift using the SwiftUI View template. The view will receive a binding to an optional Exercise.Difficulty to mark the selection. Each difficulty level will be presented in a List row. The currently selected level for the filter will be marked with a checkmark symbol image.

The user will be able to select the difficulty in the filter by tapping on a row. To make sure that the tap gesture is activated when the user taps anywhere in the row and not just on the text or the image, we'll apply the contentShape(.interaction, Rectangle()) modifier. 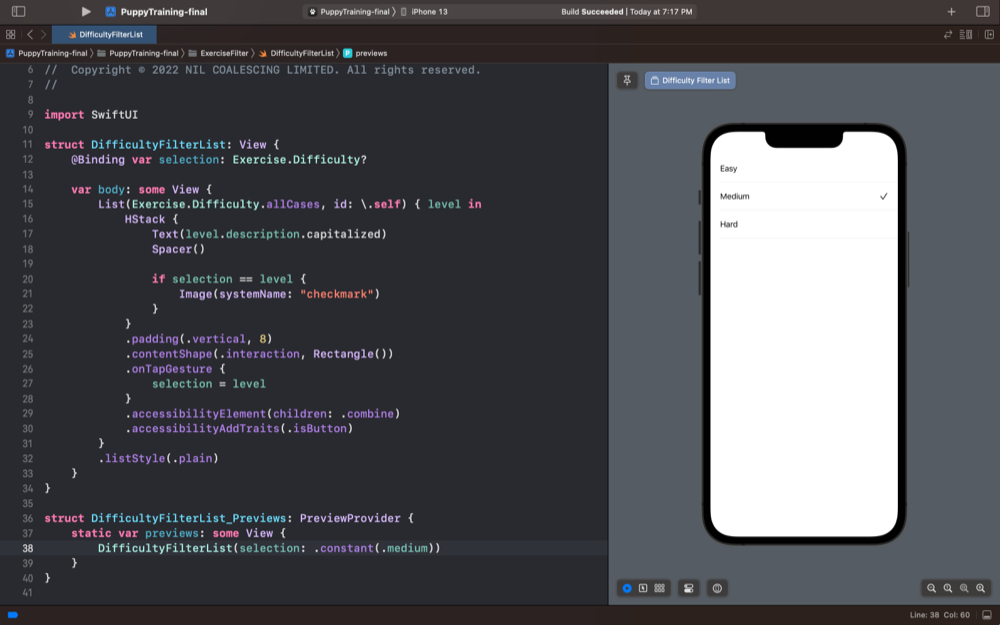 Note that we can dismiss the sheet from within the SwiftUI view using a SwiftUI API too. The dismiss action is injected into the environment by the framework and can be used to dismiss modals or pop views from the navigation stack.

To preview ExerciseFilterView in the canvas we simply need to pass it an ExerciseFilterState object instance in the preview provider. 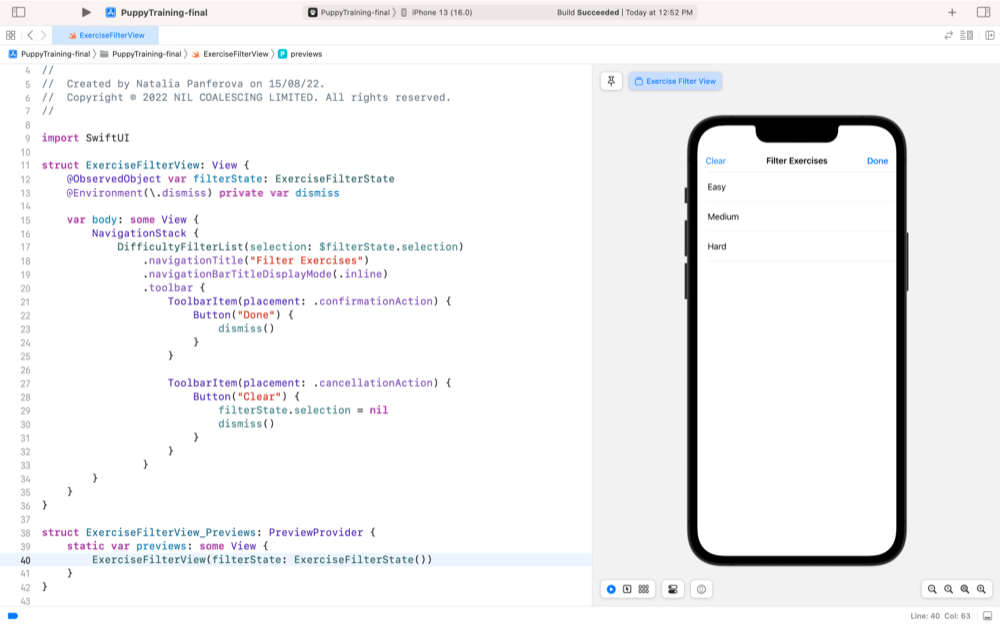 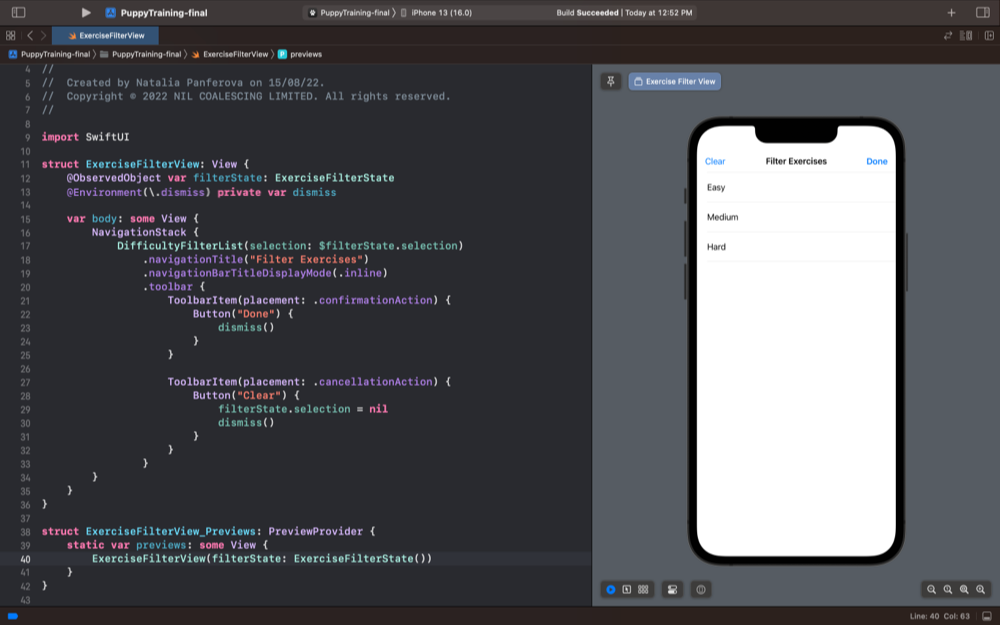 # Add a Hosting Controller in the storyboard

After we defined our SwiftUI view, we need to add a Hosting Controller to present the SwiftUI hierarchy from the UIKit layer of the app. We are going to do that in the Main.storyboard file.

First, we'll add a Bar Button Item to the ExercisesViewController in the storyboard that will tigger the sheet presentation. We'll call it Filter and set the line.3.horizontal.decrease symbol as the image. 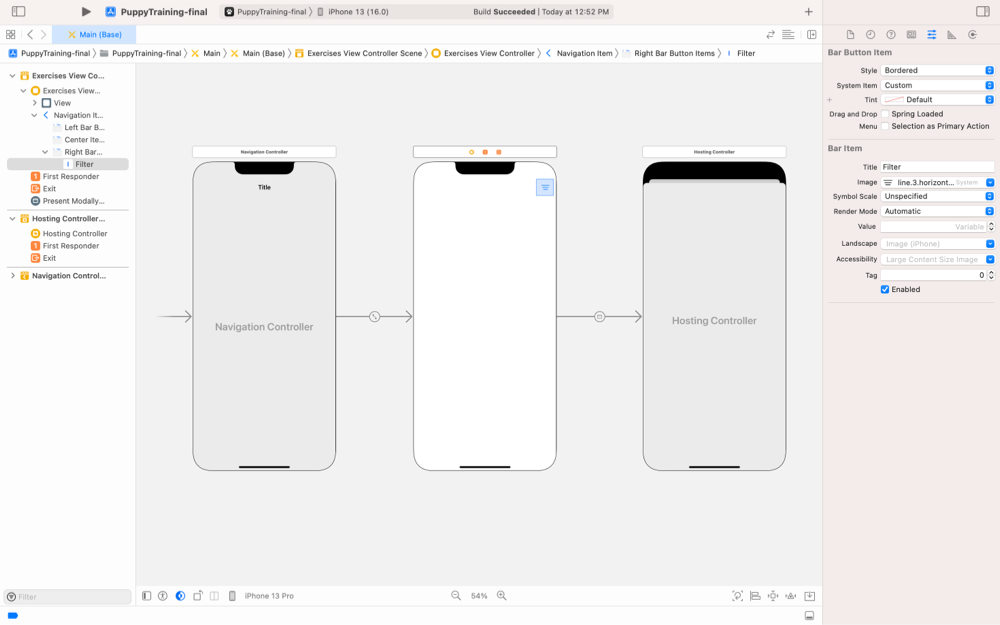 We still need to set our ExerciseFilterView as the root view of the Hosting Controller we just added. We can do that in the segue action method. We'll open the ExercisesViewController.swift in the assistant editor and control-drag from the segue to an area inside the controller. Using the popup that appears, we'll create a Segue Action and call it showFilter. Inside this action we can prepare the Hosting Controller for presentation.

We will create an instance of the ExerciseFilterView and pass it the filterState stored in the view controller. Then we will initialize a UIHostingController with the coder passed to the action and the SwiftUI view. Once the controller is created, we can customize it the way we would a regular UIViewController. Here we are going to set a medium detent on its sheetPresentationController property so that the filter sheet only covers half of the screen. 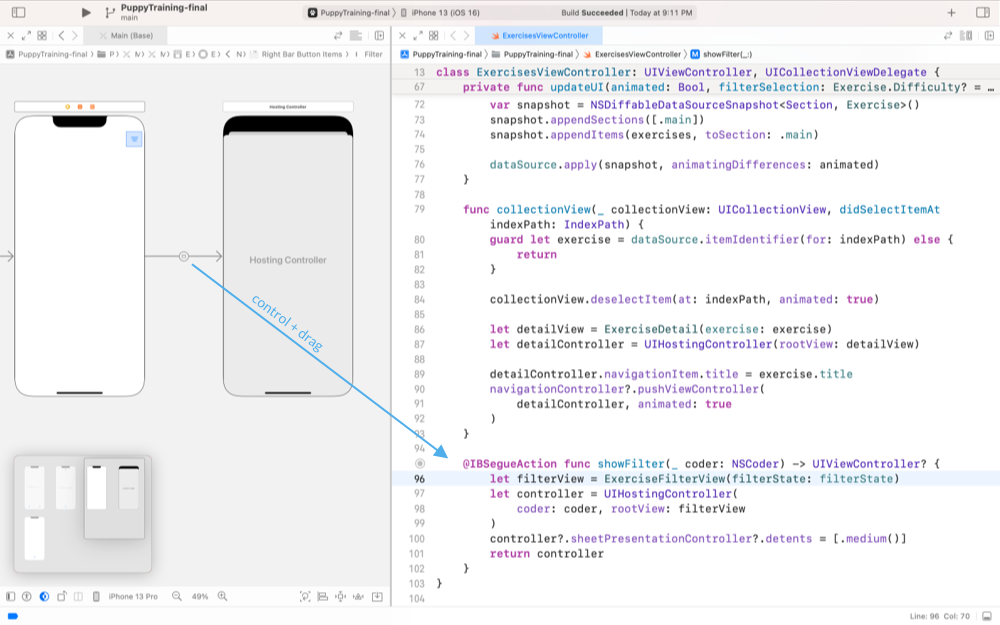 If we run the app now and press the filter button the sheet will appear as expected. The SwiftUI side already works correctly and tapping on a difficulty level will add a checkmark to the row. But the UIKit part is not set up to react to the changes in the filter state yet.

The last thing left to do for the filter to function is to update the collection view to reflect the selection. We are going to use the Combine framework to subscribe to changes in the published property of the observable object and trigger a UI refresh.

We need to change the updateUI() method defined in the ExercisesViewController to accept a filterSelection parameter. It will use the selection value to filter the exercises provided by the ExercisesController and update the data source with a new snapshot.

To observe the changes in filter selection we will add a subscriber to the selection property of the ExerciseFilterState in the view controller. We need to import Combine and add a cancellable property that will hold the subscription. Inside the viewDidLoad() method we will create a subscription that triggers the UI update with animation when selection changes.

Now the UIKit controller and the SwiftUI filter view are fully connected and the changes in the filter are properly reflected in the collection view.

Using Combine is just one of the possible ways to react to changes in the observable object on the UIKit side. I find it to be the most concise in this case, but you could implement what works best within your app pattern. You could observe the changes to the property with didSet and post a notification or call a delegate method to notify the controller about the change.